Five months have passed since IDC named IBM the preferred Infrastructure as a Service (IaaS) provider, leaps and bounds ahead of Google, Microsoft, Cisco, HP, and Amazon. (The IDC survey, dubbed the Public Cloud Tracker report, was the first of its kind.) Since then, IBM has been steamrolling through the IaaS space on a blitzkrieg with offerings that cover every inch of the cloud and beyond.

The IDC survey is important because it gauges future preference, not current market share. The question was framed like this:

"Please select the top 3 vendors that you believe can provide infrastructure as a service (IaaS), for private and/or public, most effectively, whether or not you currently utilize these services from third-party providers."

And the winners were:

In May 2014, current market shares would have flipped the standings upside down, with Amazon the clear leader. But it’s common knowledge that IBM showed up late to the cloud party. (As it’s said around the halls of Armonk, “Making changes in IBM is like turning an aircraft carrier – it takes a long time to come about.”) When IBM started to show up, it appears that the market breathed a sigh of relief. In terms of whom the public trusts to provide reliable offerings in the cloud market, IBM is a natural choice.

Today, IBM’s Cloud portfolio is as broad and deep as any on the market, with offerings for:

Perhaps the most compelling proof of IBM’s faith in the future of their cloud strategy is their investment in the construction of 40 new data centers around the world. 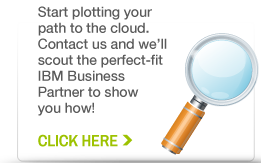 Clearly, the May 2014 IDC survey results say more about the IBM brand and it’s legacy as the big daddy of the IT industry than anything else. When you consider the similarities of cloud computing and host/terminal computing of the mid-20th century, it follows that IBM would have the most informed understanding of the overall data center/thin client model and the only company with the bucks to build 40 data centers all at once.

The editors at CIOzone sum up the discussion nicely: “Would you place your bets on IBM engineers or Amazon engineers to win the [cloud] battle?” The same might be said for the IBM Business Partners that can help your company take advantage of IBM's cloud offerings. To learn more, click here.