Simplifying IT Implementations With the Flip of a Switch

You don’t often hear people talking about how smooth and easy their last IT implementation went.

What’s newsworthy about everything going right?

We want to hear about the disasters, tantrums, tears, and rage. But you’ll find none of that in this story.

The first takes aim at the process of deploying and maintaining IBM x86 servers. The second approach, known as converged infrastructure, leapfrogs the whole setup and configuration process altogether by pre-integrating all the infrastructure components at the factory so it’s ready to run right out of the box.

The tool’s graphical user interface (GUI) initializes the discover, update, and configuration phases of server setup, while including templates that make it easy to automatically replicate settings across servers with minimal intervention.

As appealing and efficient as tools like FastSetup are, the arrival of converged infrastructure offerings has the potential to supersede setup tools altogether.

According to IDC, companies spend roughly 70 percent of their annual IT budgets on just keeping their systems running.

Dan Hiss at IBM says, “With traditional systems, companies really struggle with the islands of IT networking, compute, storage, backup etc. and making sure that all the interconnections are optimized and are working properly. With converged infrastructure, a lot of the guesswork and the connecting of the elements together is already done.” 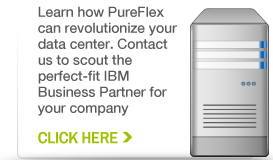 These prebuilt and pre-integrated systems, like IBM PureFlex Systems, are literally intended to get a company up and running almost instantaneously.

According to Tom Brey, PureFlex Chief Architect at IBM “You don’t have to hook a serial cable or Ethernet cable into each component, and then start integrating component to component. With PureFlex, we’ve handled all the intra-rack cabling, integrating all these components together so it arrives as a complete system, ready to run.”

Of course torturous implementations full of tears, rage, and angry epithets won't go away overnight, but at least now we know of a couple of ways to avoid them.